As an historical location Jelling has formed the centre of rotation for many investigations and at the present time an important archaeological and interdisciplinary project, financed by the Bikuben foundation, is in its final phase. Within the limitations of the project the place-names of the relevant area have also been studied.

The village-name Jelling, however, has no direct relation to Harald Bluetooth’s monument. His era was somewhat later than the period during which place-names in -ing/-inge were being formed, a period that covers the Iron Age down to about 750-800. 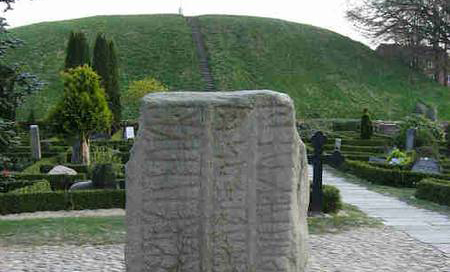 The South Mound and the rune stone of Gorm the Old in Jelling, the small Jelling stone. Photo: National Museum of Denmark.

A derivative ending such as -ing/-inge does not have any meaning in itself but it is used in word-formation and place-name-formation to indicate that there is talk of a place. For example, the locality-denoting word/place-name Bregninge "the place with ferns" is formed from the Danish common noun (plant-term) bregne 'fern'.

Place-names in -ing/-inge can reflect a merging of several previously separate one- or two-syllabled derivative endings, including -ung/-unge, although they had already merged into -ing/-inge in the medieval period. In a few cases medieval spellings occur, however, with the original u-vowel in the ending. It is particularly among the oldest forms of the name Jelling that spellings with both i and u occur and very rarely also a.

For example, from about 1185 (transmitted in a younger copy) we find the forms Ialang and Ialing, from about 1200 (in a later copy) the form Ialungam (where -am is a Latin inflexional ending). The first syllable is always written with the a-vowel as Jal- or Ial- until around 1300. Had the original ending been -ing/-inge, it would have been expected that the vowel a in Jal- would have been changed to æ (written e) as a result of the development referred to as i-mutation, which was active in the period down to about the year 1000. Since the a-vowel has survived, it is probable that the original form was *Jalung (* indicates that this is a reconstructed form).

Which word was the basis for the derivation?

Against the background of the reconstructed form, a search must be made in the dictionaries for words that in Old Danish would have had the form *jal. No such word survives independently in Danish, neither in runic inscriptions nor in medieval texts.

The sound combination ia developed in Nordic/Danish from the splitting up (breaking) of an older Common Germanic (short) e-sound into two sounds: the j-sound and the a-sound. It is therefore likely that *jal in *Jalung goes back to an earlier stage *el(-). In Old High German (the German language in the period that corresponds to the Danish Viking Age) there occurs a colour adjective elo (elawer), which in a slightly younger form of German has the form el (elwer). The meaning of the German word is 'yellow' and the root of the word goes back to a still older colour-denoting word root linked to the meaning 'red, brown', which is known from words denoting animals and plants. It is possible that the element *jal in *Jalung is the same word as this colour adjective.

On this basis the place-name Jelling can be interpreted as an ung-derivative of an Old Danish colour adjective *jal with the meaning 'yellow' so that the place-name means "the place where it is yellow". Precisely what was yellow in or around Jelling or in what shade of yellow the place-name cannot tell us. As the name for an area it is typical to think that the local vegetation may be the reason for the name but it is also possible that the colour of the earth may have played a role. The place-name Hviding for example is interpreted as "the place that is white", probably with reference to areas with a light, sandy soil.

Not the only Jelling

In addition to the Jutlandic village that became famous because of Harald Bluetooth’s monument, there are several other localities that bear the name Jelling. The village-names in Sjælland Ting (Nørre) Jellinge and Sønder Jellinge were formed in connection with the splitting up of the settlement Jellinge. This name has the same origin and explanation as the Jutlantic Jelling.

The watercourse name Jelling, which is recorded in the report submitted by the local priest in 1638 as the name borne by a stretch of the stream Dybe Å that runs through Dybe parish south-west of Lemvig, is probably unknown to most people. In theory the Jutlandic village name Jelling could be a name that had been transferred from another watercourse with the same name, and in this case the name would mean "the yellow one".

The original bearer of the name might then have been the stream Grejs Š– or perhaps the lake Fårup Sø. Both watercourses now take their names from settlements by the watercourses, Grejs and Fårup, and it is not unlikely that they may both earlier have had other names before the settlements were established. Nor is it unthinkable that, for example, ochre or the many limestone formations in the neighbourhood can have given the water a yellowish appearance. This suggestion, however, must just remain a suggestion since it lacks support from the remaining name-material in the region.

Almost every Dane will have heard of the two great runestones in Jelling, which were raised by Gorm the Old and his son Harald Bluetooth respectively. Only a few people, however, have heard about the third runestone found in Jelling.

This is certainly not as striking as the two other stones but nevertheless it is not without interest because its inscription contains the oldest known occurrence of the masculine name Basse.

Read more about the name Basse