Most Danes have heard about the two rune stones which were set up by Gorm the Old and his son Harald Bluetooth respectively. Only a few of them, however, know anything about the third rune stone that has been found in Jelling. It is of course nowhere near as exciting as the other two but nevertheless there is something rather special about it because it contains the oldest known record of the masculine personal name Basse.

This name is identical with the Danish noun basse and is thus to be considered as a byname. In Old Danish the specific meaning of this word was 'wild boar', as recognised today in the derogatory terms grisebasse 'piggy' and vildbasse 'dare-devil'. It might seem hardly flattering to have been called Basse, since the word has since been used in a derogatory or joking sense of nasty insects and unattractive male individuals (cf. words such as skarnbasse 'dung-beetle', bulderbasse 'blusterer', spradebasse 'coxcomb' and knurrebasse 'grouser' but this was not the case when the Viking Basse was given his name. He must have been associated with the wild boar in some kind of positive respect – perhaps as the symbol of a fine warrior.

That the byname Basse was not considered to be derogatory in the medieval period either is demonstrated by the use of the name as an hereditary aristocratic family name. A noble family from Sjælland which employed the decapitated head of a wild boar as its heraldic device actually bore the name Basse. Following the same pattern were such other aristocratic family names as Oxe 'ox', Marsvin 'porpoise' and Brok 'badger'. It may also be noted that the terms gris 'pig' and galt 'castrated pig' were also then in use as aristocratic family names – names that would be likely to cause raised eyebrows at the present time.

The runic inscription in Jelling

The rune stone, which is illustrated in the database Danske Runeindskrifter, is unfortunately now in such a fragmentary state that it is only very incomplete. In spite of the damage to it, however, the formula Basi gærþi kumbl 'Basse made this monument' is quite clear and the inscription can be dated to the end of the later Viking period c. 900-1020.

The name can be represented with Latin letters as basi and in runes it appears as:

From the present-day point of view the form seems to lack an s but it is a characteristic feature of runic characters not to write two identical letters immediately after each other.

The formula gærþi kumbl 'made a monument' indicates that it was the person named who raised the stone and that Basse must have been of high social status but there is nothing to suggest that the byname was particularly widespread in the Viking Age. There are no examples of it as a specific in the types of place-name that were common in the Viking Age and no certain examples in all the place-names of the medieval period. It is possible that the male personal name does occur there occasionally but the relevant instances may just as likely, or more so, represent the substantive wild boar. This is the case, for example, with Barsbøl north of Mariager Fjord and Bassebæk Mølle (earlier Bassebjerg Mølle) in Karlebo parish near Hillerød.

The runes from Stoby church

A late runic inscription in Stoby Church in Skåne, scratched into the plastering of the wall, shows, however, that the masculine name was still in use in the medieval period. Here the runic form of the name is bassæ with indication of a weakened final vowel and a double s according to the Latin scribal practice:

Since the inscription is found inside a church and can be dated to the medieval period, it is possible that the name was that of a cleric of lower status. There are also several fifteenth-century documents which contain evidence of the use of Basse as a masculine name in the medieval period. For example, a document from 1434 refers to a peasant farmer called Basse Bederß, while a Basse Humlemester 'hop master' is named in a document from 1470. 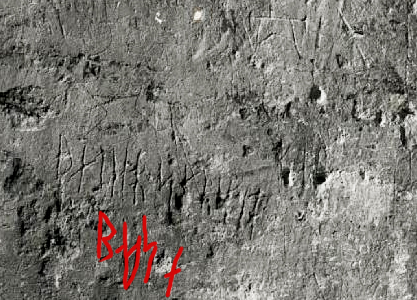 The inscription from Stoby Church. The name is indicated in red in the illustration. The runic symbols for a and s are joined together in a so-called bind-rune.