Early in 2010 Nicolai Wammen, who was then Mayor of Århus, proposed to change the spelling Århus to Aarhus. The reasoning behind the change involved expressions such as "digital profiling", "global competition", "visibility" and "impact". These are terms that had been adopted by some of the citizens, organizations and institutions in the hearing that had been arranged by the municipality.

There were others, however, who preferred the existing spelling. And now it was up to the mayor and the council to decide whether Århus was to have a new spelling with double-a or not.

This is not the first time that political attention has been paid to the spelling of place-names involving aa and å. The most recent spectacular display of political attention being paid to the spellings of place-names with aa and å took place in 1997, when a group of citizens from Aabenraa, under the leadership of the county mayor Kresten Philipsen, the town mayor Jørgen Witte and four elephants, made their way to Copenhagen to take part in a demonstration on Christiansborg palace square. The elephants all carried the logo for the demonstration, Aabenraa, written as @@benr@@. 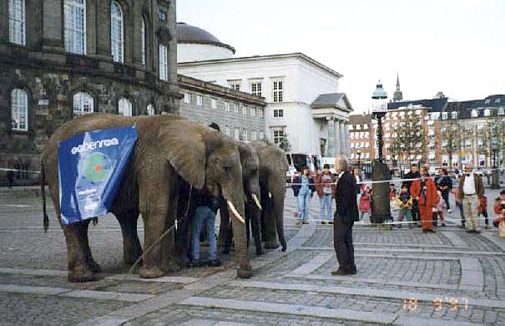 The aim behind the demonstration was to have a change made in the Danish spelling regulations so that aa – as in Aabenraa – would no longer be placed at the end of the alphabet together with the normal å but instead be moved right up to the front of the alphabet and be placed there as a plus a. The citizens of Aabenraa, however, did not have their wish fulfilled and aa is still alphabetized together with å. The whole story can be read in Nyt fra Sprognævnet from December 1997.

From aa to å

The letter å was introduced in 1948 to replace spellings with double-a and in subsequent years å was used in the Language Council’s Spelling Dictionary and the Danish Place-Name Committee’s orthographical lists of authorized spellings of place-names. In the many personal names containing å, however, the spelling å was not universally accepted – Aage Aagesen, the Lindegaard family, Aase Storgaard and others had been used to spelling their names with double-a  and many of them continued to do so. For one thing they had Birth Certificates and other official papers confirming the spelling with double-a.

In the period after 1948 many unauthorized name-forms of Danish place-names with double-a developed and this was one of the reasons why it was made optional in 1984 to use å or aa in place-names. The Danish Language Council and the Danish Place-Name Committee both recommend the use of å, not only because this letter is the only correct one in the normal orthography but also because it is inconvenient to have an independent phoneme that does not have its own corresponding letter.

Many local authorities, however, prefer spellings with aa, e.g. Aabenraa, Aalborg and Grenaa. Their wishes are reflected in the orthographical lists of the Place-Name Committee. In the cases where such place-names are included in the official Spelling Dictionary, the headword is written with å but the possibility of using the form preferred locally is also mentioned. The same applies to words such as aalborgenser/ålborgenser, while the form aarhusianer does not (yet) appear as a permissible form.

Local authorities in Aarhus ended up preferring the spelling Aarhus and it was their right so to do. So as of of January 1st 2011 this spelling is correct but it is nevertheless important to point out that it will always be correct to write Danish place-names with spellings with å: Åbenrå, Ålborg, Århus, Fåborg, Grenå, Tåsinge, Tåstrup etc.