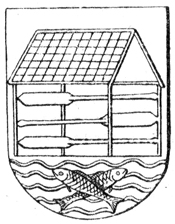 In its present form, and not least in its pronunciation, the name Århus would on the surface seem to be a compound of the words åre 'oar' and hus 'house', and there are many examples to show that this was the way in which the name was in fact interpreted. For example, several versions of the city arms of Århus display a house built of oars. There is thus no doubt that the name Århus has been considered to have originated as 'Oar-house'. This is not, however, the correct explanation of the name's origin.

The oldest written form of the name, AROSEI, a form that has been handed down on a coin that can be dated to between 1042 and 1047, shows clearly that the origin of the name Århus has nothing to do with oars or any form of rowing. This form reveals that the name is in fact a compound of the Old Danish word ār, an old genitival form of the word ā 'river' and ōs 'mouth'.

The original meaning of Århus was thus in reality 'the mouth of the river'. Interestingly enough, it is the oldest written form of the name of Århus that has given its name to the city's new Art Gallery: ARoS. In this way the original form of Århus has been given a new life.

The obverse and reverse of a coin from between 1042 and 1047. Reproduced from a drawing in P. Hauberg: Myntforhold og Udmyntninger i Denmark indtil 1146, Kjøbenhavn 1900. The form AROSEI has been picked out in dark red.

Change in meaning in the course of time

The example of Århus shows that place-names can be very dynamic in form and expression in the course of time and that a precondition for interpreting a place-name correctly is to seek out its earliest written form, and perhaps also its pronunciation. Once one has located the oldest written form of the name and the most local pronunciation of it, then one can compare the individual elements in the name with what is known about these words at the time of the formation of the name.

The precise date of the formation of the name can be difficult to determine – and in the case of Århus it is in fact impossible to do this on the basis of the name-form alone. Since many place-name elements can be dated linguistically or in other ways, however, one often has a broad spectrum of information against which one can make a dating. We know, for example, that names which end in -lev are older than those which end in -bøl or -bølle. You can read more about this under Common place-name types.