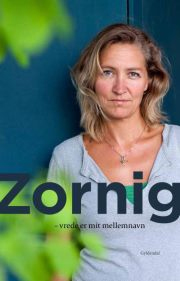 The High German surname Zornig is making frequent appearances in Danish media at the moment and this is largely because of the soon-to-retire chairman of the National Council for Children Lisbeth Zornig Andersen. Her middle name is generally categorized by name scholars as a derisive name, since the adjective zornig has a negatively-charged and derogatory meaning in High German. Zornig Andersen is quite clear about this and she actually plays on this fact in the title of her book "Zornig – anger is my middle name".

The surname Zornig is unusual because it represents a rather limited group of original bynames that are formed from negatively-charged words. Such names are only rarely met with in Danish. Zornig and other High and Low German derisive names would seem to have been brought to Denmark by the many merchants, craftsmen, officials, mercenary soldiers etc. who migrated to Denmark from Germany in the Late Medieval period and afterwards. This foreign naming-practice has long been recognized here.

Evidence for this fact is the long-standing Danish literary tradition for bestowing upon stereotypical characters (generally 'the German ones') in drama, fiction, the media etc. such negatively-charged or simply German-sounding names. The playwright Ludvig Holberg, for example, calls the protagonist in his comedy "Den Stundesløse" (The fussy man) (1723) Vielgeschrey (= much shrieking). This is a fitting name for this character, for Vielgeschrey is constantly crying out about all the things he has to do, without actually doing anything at all. In Holberg's "Den pantsatte Bondedreng" (The peasant in pawn) (1726) there is a debt-ridden character called Leerbeutel. As the name implies, his purse is quite empty. In P. A. Heiberg's "De Vonner og Vanner" (The vons and the vans) (1792) we meet the German mountebank Captain von Aberwitz (= insanity), who only wants to marry clockmaker Petersen's daughter Sofie so that he can earn money by renting her out to be the mistress of a wealthy baron.

The formation of negatively-charged German or pseudo-German names was not the prerogative of the 18th century. As modern examples we may point to the society journalist Carina von Hørensagen and the perpetually surly writer of angry letters Erling Brokkendorf, both characters in the newspaper Politiken's humorous back-page column ATS. We also find such a name in Manu Sareen's "Iqbal Farooq – in Bornholm" (2011) where an unpleasant German is called Von Zwetllerswein Gehundden. The historian Jes Fabricius Møller has described this pseudo-German name very precisely as "one that recalls both hog and hound and [is perfect for our classical concept of] 'the German' as a sadistic, Prussian, aristocratic officer". (In Kristeligt Dagblad, 3rd April 2012).

There are several different types of derisive names, e.g. names formed from small sentences, adjectives, nouns and adverbs. One example is the Low German Mackeprang ((I) make trouble, i.e. a troublemaker). There is at least one old specimen of this type of name in a Danish written source.

A man by the name of Anders Hellekande was killed in Malmø in 1552. He is described in legal documents both as 'Anders Mattsøn, known as Hellekalde' and simply as Anders Hellekande. The byname Hæld(e)kande (= drunkard) is a compound of the verb hælde 'to pour' and the common noun kande 'jug'. Whether the name is an original Danish formation or a loan from Middle Low German is uncertain, since the words involved are found in both languages. The name may have been formed on analogy with the Middle Low German name Störtebeker (= '(I) tilt the beaker', i.e. a drunkard).

The names Hartnack and Mannteufel are particularly widespread in Denmark. The names Strid 'strife' and Splid 'dissension', which might both on the surface appear to be Danish, also belong to the group of German derisive names in Denmark, since the two names have been borrowed into Danish from Middle Low German in the Late Medieval period.

The singer Jens Unmack – was one of his ancestors an unpleasant piece of work?

Some names have a negative connotation because of their prefix un-, as in German and English, which corresponds to Danish u-. The name Unmack (= 'malaise', i.e. an unpleasant or distasteful person) is one example. This type of derisive name also existed in Denmark in the medieval period. In a document from the close of the 1450s there is a reference to a man in Lolland called Nielß Vren 'unclean'. This name-form may rather, however, be a corrupt form of the Danish aristocratic name Urne. A more certain example is the byname Udyd bestowed upon a Mates Vdydh 'defect, blemish' in Nykøbing Falster in the 1490s.

It seems strange to us today that the negatively-charged and derogatory bynames were generally accepted and that the German names in particular were able to achieve the status of hereditary family names. There are three possible explanations for this circumstance, the first of which is related to medieval outrightness. In the period when the derisive names arose, unlike today, it was customary to say one's meaning, to call a spade a spade for example. In this way a name such as Scheel (= a cross-eyed person), Stahmer (= a stammerer) and Vornefett (= 'fat in front', i.e. a corpulent person) can be explained, since these derisive names provided straightforward information about the name-bearer. We can only hazard a guess, however, as to why such disparaging information about a particular individual can have developed into a surname.

Another explanation is related to irony. One can imagine that the negatively-charged nickname may in some cases not have been interpreted in a concrete fashion – as something exclusively negative – but rather ironically. Ironic naming is still current in connection with unofficial nicknames, pet names etc. In this way a stout man might be called The needle or a bald man Curly. Little John in the stories about Robin Hood was called Little precisely because he was so big.

A third explanation may be related to boasting, i.e. that emphasis is laid upon especially imposing or extraordinary features about oneself or others that transcend normal competition. The human devil Mannteufel may have been known for his amazing recklessness, while a brave knight may have been given the byname Hartnack because of his strength and determination. In this way one could say that derisive names may in some cases have been employed to construct an identity and an image for oneself or for others.

It is precisely the presentation of an image that was Lisbeth Zorning Andersen's aim when she chose to emphasize her middle name Zornig, when she wished to present a characteristic of herself in her book. That Zornig Andersen's middle name is not actually the common noun anger (German Zorn), as implied in the title of the book, but on the other hand the adjective angry/irate, is in fact a matter of no consequence.