Tristan has been included in Statistics Denmark's list of the 50 most popular boys' names since 2008. In earlier years it was a very rare name in Denmark. There are a few scattered occurrences of the name in the 19th century and it was not until the middle of that century that the name began to make regular appearances. Since the middle of the 1990s, however, the name has been increasing in popularity.

Tristan is a variant form of the masculine name Tristram, which derives from a Celtic legend known under the title Tristan and Isolde. In this, Tristan is a knight who has been sent out to collect the future bride of the king of Cornwall, the Irish princess Isolde. On the journey, however, these two fall in love with each other. Tristan subsequently leaves Cornwall to go to war and after he has been wounded, he sends for Isolde. He dies, however, before she arrives, and Isolde dies of grief.

It is thought that the name Tristram comes from a Pictish name Drostan, and that through the medium of Old French sources the name has been linked with the Latin word tristis, which means 'sad'. Thereafter the form Tristan becomes widespread. The name also occurs in the variant forms Trystan, Tristrand and Drystan but it is only the form Tristan that seems to be used in Denmark.

The reason why the name-form Tristan is the one that has become widespread in Denmark is that this is the form with which we are familiar from various modern versions of the story about Tristan and Isolde, and from films about King Arthur and the Knights of the Round Table in which Tristan appears as one of the knights.

These stories have been re-told many times but best known is probably Richard Wagner's opera Tristan und Isolde (first performance 1865). Of greatest significance for the dissemination of the name in Denmark in more recent times is probably the American film Legends of the Fall (1994), an epic tale in which Brad Pitt plays the role of the youngest boy in the family. The curve shown below reveals that it was exactly in 1994 that the popularity of the name began to grow.

The slope of the curve also shows, however, that the film King Arthur from 2004, with Mads Mikkelsen playing the role of the knight Tristan, and the American film Tristan & Isolde from 2006 can also have provided inspiration for the use of the name. At all events, the employment of the name increases intensely around 2005 and in subsequent years.

Tristan in the North

Tristan also became more popular in Norway and Sweden within the same period as in Denmark. The name does not become quite as popular in these countries as in Denmark but although the name is not to be found on the popularity charts there, the increase in the use of the name is nevertheless clear.

In Iceland Tristan is also a popular name. It stands at no. 38 among the most popular names for boys who were between the ages of 0-4 on 1st January 2008 and it seems likely that the name's popularity is increasing there since it had risen to no. 22 for boys born in 2009.

Tristan in the USA

In the USA the boys' name Tristan has also become more popular in the course of the last decade. There was also a marked increase in the use of the name around 2005, where the name rises from a position as no. 113 to no. 86 in 2006. Perhaps the inspiration here, too, has been the above-mentioned films about King Arthur and Tristan & Isolde. 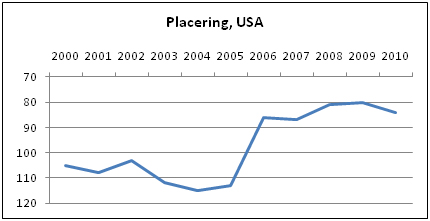 It does not look as though the popularity of the name will continue to increase in the years to come. All the diagrams shown above show that the curve is beginning to flatten out or even to fall in the most recent years. Perhaps the boys' name Tristan will thus peak in Denmark at this time, and it is interesting to note that this tendency also seems to be relevant in several other countries.