The area around Tissø in West Sjælland reveals many cultural-historical traces from Antiquity and the Middle Ages. In those times the landscape was varied and rich in natural resources with cultivated fields interspersed with forests, common land and fertile meadows. On the western bank of the lake there was a large and wealthy complex of buildings from the Late Iron Age and the Viking Age, with banqueting halls, market-places and workshops. There is probably a link between the name of the lake and this area. 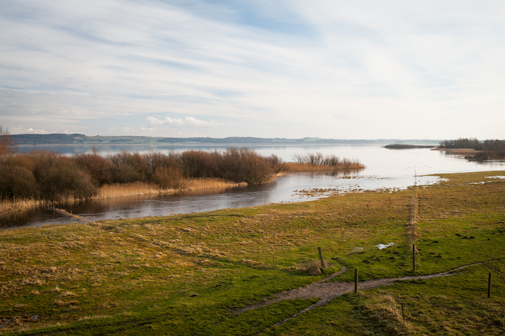 The first element in the name Tissø can be *Tī, the Old Danish form of the name of the Nordic god Tyr, which is also contained in the name Tuesday. The name of this god occurs frequently in sacral place-names in Denmark such as Tisvilde, Thisted and Tirslund but makes only one appearance in Swedish place-names and one possible one in Norwegian ones.

Tyr was probably an old Germanic god and his name has developed from the proto-Germanic word *tiwaz, Indo-European *deiuos . It is related to the name of the Greek god Zeus, the Indian Dyaus and the Roman Jupiter. The basic meaning of these words is 'godlike, divine' and there was probably a substantive meaning 'a god' that was identical with the name Tyr, the appellative Old Norse týr, Old Danish *tī. 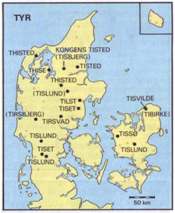 Survey of Tyr-names in Denmark. Map reproduced from the journal Skalk.

The name Tissø can thus be interpreted as "Tyr's lake", as "the god's lake" or as "the gods' lake". Whether or not the name contains the god's name Tyr or the word for 'god(s)', it reveals that the locality must have had a special religious significance before the introduction of Christianity. 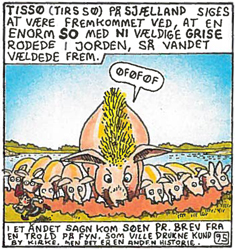 In his Illustrated History of Denmark cartoonist Claus Deleuran relates a couple of the legends about the name Tissø in this way.

"Tissø (Tirssø) in Sjælland is said to have arisen because an enormous sow with nine huge piglets grubbed around in the earth until the water gushed out.

In another legend the lake arrived by letter from a troll from Funen who wanted to drown Kundby Church but this is a different story altogether."

In popular tradition there are many other explanations as to why the lake is called Tissø. In olden times the people told each other that the lake had been constructed by pigs or trolls. One legend tells that the witch Marie sat down on a rock between Store and Lille Fuglede and urinated profusely (urine in Danish: tis). That is why the lake received the name Tissø.

In other legends the place-name is linked to the numeral ten (in Danish: ti). A troll was irritated by the ringing of the bell in Sæby Church, which stands on the south-western shore of the lake. He enticed a man to deliver a letter to the church: The man was told simply to throw the letter over the church wall but he was not to take it out on the way and look at it. The man could not resist the temptation to have a peep and took the letter out on the meadow west of the church. Then water from ten lakes began to pour out from the ten seals and formed the lake; the church remained standing unharmed on the shore of the lake that was called Tissø.

In another legend the troll tried to throw ten rocks at the same church but the rocks were thrown back and formed the lake. Other legends tell about ten pigs (or a sow with 9 piglets) who grubbed around so much in the earth that the lake was formed. Finally, there was a suggestion that the name reflects the fact that the lake covers an area equal to the area of land allotted to ten men.

What was sacred about Tissø?

The Viking-Age settlement mentioned above was in its time one of the dominant estates in Sjælland. In connection with the banqueting halls excavators found a small fenced-in building that may well have functioned as a heathen cult-place and round about in the landscape traces have been found of different types of sacrifices. Both in the lake and in the boggy area Maderne behind it there have been found weapons and parts of skeletons of horses and human-beings. Many of the finds can be dated to the Viking Age but some of them date right back to the period before the year 0. The religious significance of the place can therefore be traced far back in time. The question remains as to when the name was formed.

Since the transmission of the name does not permit us to see earlier forms, it is formally possible that the name originally referred to an island (ø) and not to a lake (sø). Because of the genitive s it is impossible to decide whether we are dealing with Tis-sø or Tis-ø. The extensive settlement on the western shore of Tissø lay on high-ground which at that time would have appeared to be a small island surrounded by lake and bog. We are looking at a settlement that was established close to a sacred lake; Tyrs sø or the lake of the gods? Or was it rather a sacred island with a complex of halls and a shrine? 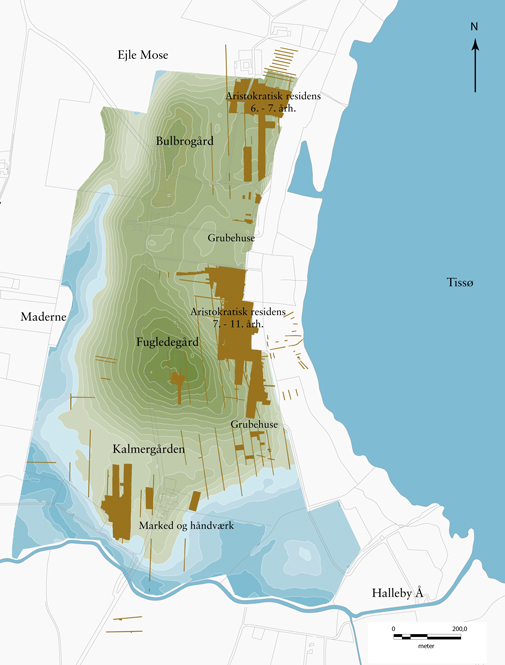 On this map can be seen a reconstruction of the landscape at the western shore of Tissø with the high water-level that there is known to have been in the Viking Age. The excavated areas are shown lying on a small island. Can this have been the original namebearer? © The National Museum, map drawn by Pia Brejnholt and Josefine Bican.

Tissø is the fourth largest lake in Denmark. At the present time the area of the lake is about 13 km² but in earlier times it was larger, since the 1890s the water-level has been regulated on several occasions.

Halleby Å runs through the lake from Åmose in the middle of Sjælland in the north-east and out of the lake towards the Great Belt in the south-west. The basin of the lake is a kettle hole left when buried blocks of ice melted out. It has a wide, shallow edge with reed swamp and a level bottom at a depth of 12-13 meters. Bird life is rich here and the lake is an EU-habitat area that in migration periods is an officially protected area.

Read more about the lake and Naturpark Åmosen (in Danish)