The oldest town in Denmark – that is what Ribe has always been known as. Whether or not it really is the oldest settlement in the country is impossible to determine. It is certainly, however, the oldest town to be mentioned. It celebrated its 1300th anniversary in 2010 and the oldest dated archaeological finds in the town have, in fact, been assigned to no later than 710 AD. 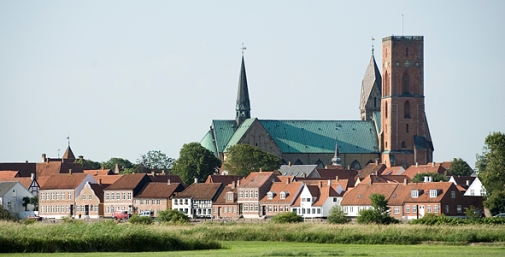 Our first written record of the town can be dated to the end of the 850s, when the missionary Ansgar was given permission by King Hårik to build a church in Ripa, that is Ribe. At that time Ribe was a flourishing trading centre and it had been so for over a century. Its placing close to the great markets in the Frankish kingdom and England resulted in Ribe's being considered to be the gateway to Denmark and therefore the perfect place to begin the propagation of the Christian faith.

Trade and shipping have always been Ribe's principle sources of income, with the export of corn, pigmeat, butter, fish, horses and oxen in the historic period. Ribe's site at the much frequented Ribe Å (river) and close to the west coast of Jutland meant that it became one of the most significant trading centres in the Middle Ages. At the same time it was also a great ecclesiastical centre, which is not strange in consideration of the facts that the first known church was built here and that the cathedral and many churches and religious houses there can be traced back to the Middle Ages.

Archaeological investigations have revealed that Ribe was established at some time in the 8th century and that the centre of Ribe still occupies parts of the original trading place. There has therefore been a very long and continuous habitation of Ribe, which means that whatever occasioned the bestowing of the name Ribe ought perhaps still to be visible or identifiable.

But what does Ribe mean then? There is, in fact, no consensus of opinion about this.
At the end of the 850s Ribe is written as Ripa and in 948 as Ripensis (the ending -ensis is actually a Latin adjectival ending). It is possible that the name was derived from a word of the same origin as Latin ripa 'river bank'. This would fit nicely with the situation of the town beside Ribe Å and Nips Å. It is also the same word that enters into, for example, the Norwegian word rip 'plank edge'. 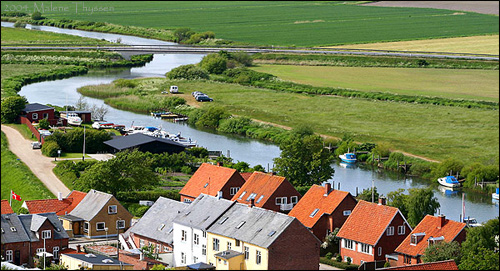 Ribe å, where it flows out of Ribe, seen from the top of the tower of Ribe cathedral. Photo: Malene Thyssen, Whitsun 2004.

It is also, however, possible that the name Ribe goes back to a word corresponding to Norwegian and Swedish ripa, which means 'a stripe or strip'. This explanation has become particularly attractive since it has been discovered that the original trading centre at Ribe was divided up into more than 40 long, narrow plots of land for the traders. It would be natural to imagine that it was the division of the emporium into long 'strips' that may have given rise to the name of the town.

Words that indicate something long and narrow often appear in field-names, while they are, on the contrary, rather rare in settlement names. So ripa in the meaning 'stripe, strip' is perhaps not the most likely meaning of the name Ribe. This is probably after all the meaning 'river bank'.