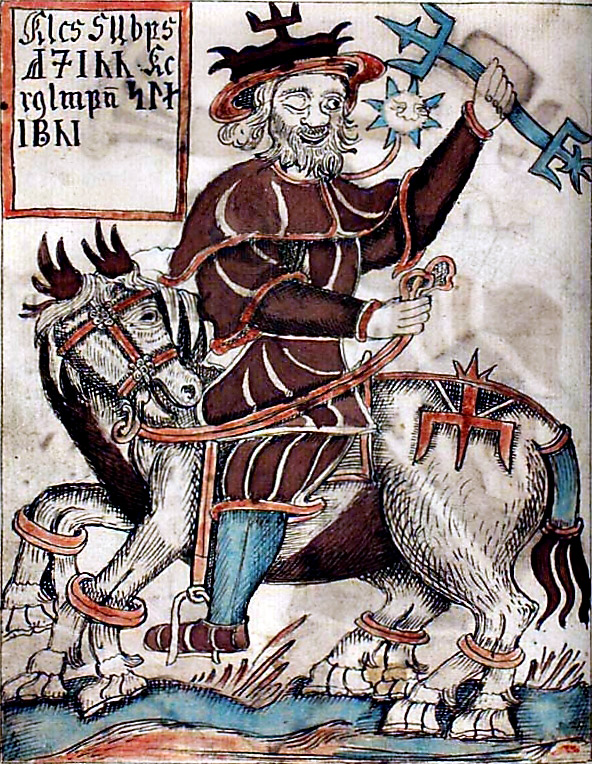 Illustration from an Icelandic 17th-century manuscript (NKS 1867 4to) showing the one-eyed Odin riding on his horse Sleipnir. (The picture is taken from Wikipedia. The manuscript is to be found in The Royal Library).

When we examine the name Odense, we can see that it is a compound of the name of the heathen god Odin (Old English Wōden) and the Old Danish word wī 'sacred object, shrine', giving the meaning "Odin's shrine". Odin was considered to be the greatest and wisest of the heathen gods known as the Æsir and can in many respects be said to occupy a central position in Denmark.

Odense is only the third largest city in Denmark but nevertheless perhaps the one that is most well-known. This is first and foremost because Hans Christian Andersen was born and grew up here but Odense has more to offer than just fairy tales. The early history of the town is interwoven with accounts of violent royal power games in which religion and sacred buildings formed no hindrance to putting a rival out of the game – for ever.

The most famous drama is the murder of Saint Knud in St Alban's church in 1085, when Knud had sought refuge in the church in the belief that he would be in safety there. This was not so, however, his enemies found him and struck him down with a bloody sword – or so the sagas relate.

It is slightly ironic that it should have been in St Alban's church that Saint Knud was to die. Before his death he had himself been a renowned Viking king and, on a raid against England in 1075, he had brought home to Odense, where he had his royal seat, the relics of both St Alban and St Oswald. The neighbouring church was subsequently dedicated to St Alban and it was presumably the oldest parish church in Odense. After King Knud's death and his subsequent canonisation a new church was established approximately on the site where St Alban's church had stood but now it was dedicated to Saint Knud – as he was now called – and the church referred to as St Knud's Church. In the course of time it achieved the status of cathedral.

Odin's shrine – and the Viking fort

Odense was doubtless a central place for early Christendom. Was there any reason for this? Even before the introduction of Christianity to Denmark, Odense had been a local power base with a royal focus. This is revealed, for example, by the existence of the above-mentioned royal seat and defensive works of the Trælleborg type – the now-lost Nonnebakken. In addition to this, however, there would seem to have been a heathen cult-centre. 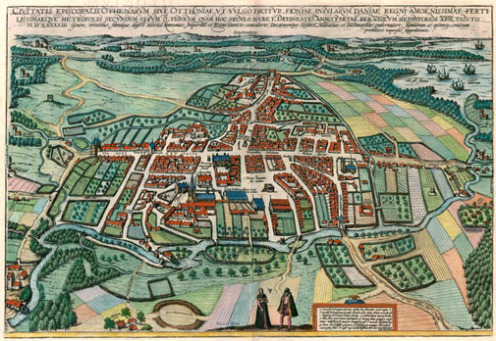 A copper engraving of the town of Odense in 1598 (Braun & Hogenberg): Civitates Episcopalis, ut vulgo Dicitur, Fioniae … The circular fort – called Nundeborrig on the map – can be seen at the bottom of the picture, to the left of the two human figures.

Since Odin was the chief and wisest of all the heathen gods, it would naturally have been a good idea to place a Christian shrine on a site for pre-Christian worship. Not only would people have known to where they should go to practice their new religion but a hefty stopper would have been put on all practice of the old religion.

On one point, however, the memory of the old cult survived: in the place-name. We can see that in the name Odense we have to deal with a pre-Christian sacral place-name by examining the oldest recorded form of the name. Odense was indeed recorded at a very early date, as early as 988, where the Latin text records it as Othenesuuigensem. It is perhaps difficult to disentangle an original *Othenswe from this form but when we also look at the form recorded by Adam of Bremen in 1075, it becomes clear that we have a compound of the god's name Odin and Old Danish wī. 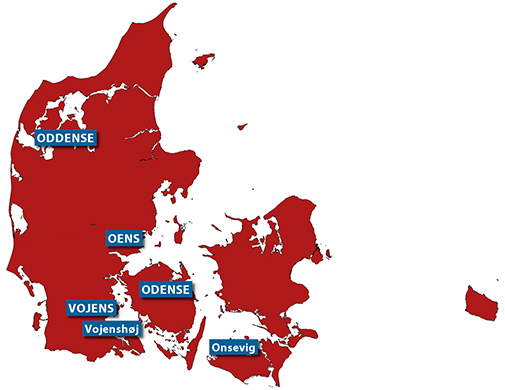 Other Odenses in Denmark – both certain and uncertain instances.

One might have thought that the worship of such an important and dominant god would only have taken place at one site and that the Odin shrine in Odense would have been unique. This is not the case, however. There are a few other examples of precisely the same place-name formation in Denmark, namely Oens (1464 Ottens) south of Horsens, Vojens (1421 Wodens, 1475 Wodense) in southern Jutland, and probably also Oddense (1410 Otenssogen, 1479 Otthensæ) in Salling north of Skive. These names are all recorded at comparatively late dates and as a result of the development of Jutlandish apocope, the tendency to drop the final, weakly-stressed ending from words and names, the historical place-name forms have been shortened more drastically than is the case with Odense. In several Jutlandic dialects the o- at the beginning of a word develops to wo- and this is reflected in the spelling of Vojens and in the pronunciation of Vojens and Oddense, which are pronounced as [våjǝns] and [woj´ǝns] respectively.

In addition there are perhaps two other possible Othenswī-localities in Denmark. The first element in the place-names Onsevig (1692 Onse Wig) and Vojenshøj (1651 Vvoyenshøj) may reflect an original Othenswī. These place-names, however, are recorded at such a late date that the first element may be the genitive of the god's name Odin and the names mean respectively Odin's vig 'inlet' and Odin's høj 'mound'.

If you want to read more about the certain examples of the Othenswī-names, their treatment is to be found in the work Danmarks Stednavne. The uncertain examples are treated here,

Odense is the principal city on the island of Funen and is the third largest city in Denmark with 170.327 inhabitants (2013).

The city is placed centrally on Funen at Odense Å (Odense River) and about 3 kilometers south of Odense Fjord (Odense Inlet).