The Danish compound place-name København is first recorded in 1253 in the form Køpmannæhafn and is certainly to be translated as "the merchants' harbour". How the city has come to end up by being called Copenhagen in English is less certain, just as is the way in which this peculiar form with g reappears in many other languages. 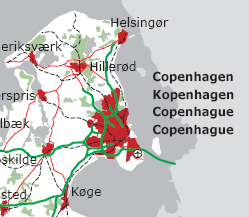 There is nothing odd in the fact that people 'translate' place-names into their own language, forming what are known technically as exonyms. In Danish, for example, we have the exonyms Rom for Roma, Prag for Praha and Bukarest for Bucuresti – in the same way as almost all names of countries have been 'translated', e.g. Italien for Italia.

On the other hand, however, it is strange that in English we have ended up with the form Copenhagen with g ˗ instead of a form with v. In English we find, in addition to the words harbour and port, the word haven to translate Danish havn, and this last word can be traced right back to Old English hæfen. It would therefore have been more logical if the English form of København had been, for example, Copenhaven, in the same way as the Swedish form Köpenhamn contains the Swedish word hamn for havn.

The Germans are coming

The explanation is probably to be traced to the High Middle Ages, when København was beginning to establish itself as a significant emporium. At that period the dominant commercial language in Northern Europe was not English but German. Moreover, it was the variety of German that was known as Low German, a form that was employed in the 'Low' German areas, that is to say in low-lying areas around the mouths of the great rivers; that is the present Holland, Flanders and Northern Germany.

If one was to make one's mark in international trade and commerce at that period, one had to speak Low German. And just as Low German in the High Middle Ages exerted a tremendous influence on Danish – roughly half of the words in the Modern Danish vocabulary consist of Low German loanwords – Low German also exerted a strong influence on English, partly under the influence of the London office of the Hanseatic League, the Stahlhof / Steelyard.

In Low German we find the word hagen that corresponds to Modern Danish have 'garden'. How a harbour can become a garden is not immediately obvious but the matter becomes clearer when a closer look is taken at the original meaning of the word have "enclosed, demarcated piece of land". The original meaning of Danish havn is correspondingly "that which grasps or takes hold of", and even though the starting-point is not identical, the two words are thus semantically related.

The traders in the hav(n)en

The earliest recorded form of the name with g is found in an entry in Stralsunds Verfestungsbuch (DD, 3rk V 279), which is dated to the beginning of the 1350s. Here, in the middle of a Latin text, it is stated that a citizen called Køpeke Moltow from Greifswald has been declared an outlaw in Copenhagen for having inflicted two wounds on Mathias Bussecowen.

Later we find, for example, the form Kovenhagen in another Latin document from 3rd March 1370, while the form Kopenhagen occurs in a Low German document from 1386 (DD 4rk. III 77), where Jesse Pedersen Friis declares that he owes Sorte Klaus, citizen in København, 16 shillings groat:

(Translation: Let it be known to all those who see or hear this letter read. I, Jesse Pedersen, known as Friis, confess and testify openly with this letter that I owe the wise man Black Klaus, citizen of Copenhagen, sixteen shillings groat, for which the above-named Klaus has given me full satisfaction, (and) I shall pay him in ready money at Easter and not defer the matter).

As far as we know, the g-form in Copenhagen is not the result of a systematic development in Low German. It does, however, have some parallels. Simrishamn in Skåne, for example, is written Somershaghene in 1377, and Low German has name-forms such as Pagel for Poul (from Latin Paulus) and Klages for Claus (from Greek Nicolaus).

The development from København to Kopenhagen may also have been supported by the many Low German place-names, borne especially by harbour-towns in Mecklenburg, which end in -hagen, e.g. Klockenhagen, Mönchhagen, Reppenhagen and Stavenhagen. In the context of the Netherlands we are familiar, for example, with Den Haag, the seat of government in Holland.

However unsystematic the development may have been, we can nevertheless observe that the g-form spread to English – and probably also to other European languages where København developed into exonyms such as, for example, Copenhague (French/Spanish), Copenaghen (Italian), Kopenhaga (Polish) and Koppenhága (Hungarian).